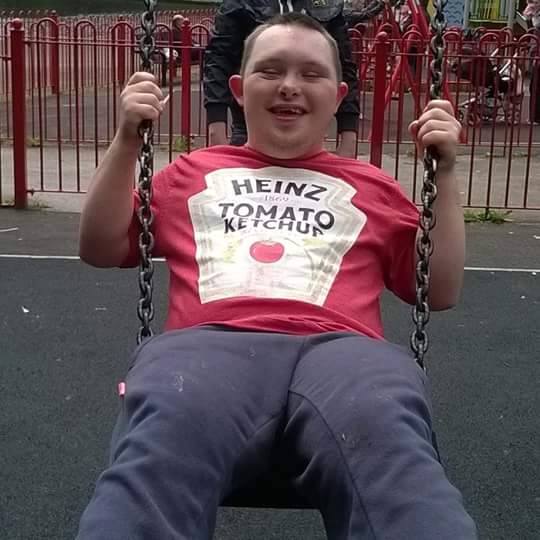 Thomas was born on the 7 June 1994. Wet Wet Wet were number one with Love is All Around and for the Rawnsley family this couldn’t have been more true. Thomas was a longed for son to his mum, Paula, and Dad, Paul, and his three older sisters Becky, Charlotte and Katie. Thomas’s family describe him as a ‘beautiful, loving, compassionate and most of all mischievous’ little boy. Even as a young adult Thomas was still little, standing tall at 4ft 10. Thomas liked ketchup, gansta music and going to the park. Thomas enjoyed spending time with his family, and was loved like only a youngest brother to three big sisters can be.

By the time he was a teenager Thomas was known to be autistic and was living at home with his mum and sisters, he communicated using Makaton and was able to make his needs understood if people got to know him well. Thomas started to become anxious as his teenage years set in and keen to keep him at home Paula asked for support. Thomas was removed from his family, into the ‘care’ of social services.

Once in care, between 2012 and 2013 Thomas was abused by a care worker at Norcott House in Liversedge. Unsurprisingly Thomas was left traumatised by this abuse. His behaviour became unsettled, he was distressed and increasingly mistrustful of staff. The staff at the home where Thomas was abused, felt his mistrust of them was a threat to their safety and they could no longer support him.

Rather than receive specialist trauma support, Thomas was moved to a secure Assessment and Treatment Unit in Bradford. Thomas didn’t receive specialist support in the ATU, instead he was heavily medicated to the point where his family consider he resembled a zombie.

Thomas’s parents grew increasingly concerned about the treatment of their son, and the threat of him being moved even further away (to Peterborough). They complained about his mistreatment, to safeguarding, to social care, to anyone who would listen.

An independent panel agreed the move to Peterborough should be blocked and they recommended Thomas have his own flat…. but Bradford District Care Trust were unable to provide that and so Thomas ended up shifted to Sheffield. Thomas was moved to Kingdom House, a specialist service run by Lifeways, 50 miles from his family and friends. Thomas was the first resident of this new service, and he arrived deeply traumatised and terrified.

Thomas’s Dad saw him the weekend before he died. He observed unexplained carpet burns and that Thomas was struggling to breathe with a chest infection. Thomas collapsed on the Sunday night, suffered a cardiac arrest and was taken to hospital. His life support was turned off, with his family at his bedside, on 4 February 2015.

Thomas’s inquest was originally started in September 2019 and was adjourned on Day 2. His inquest was started afresh in November 2020. At the end of the evidence the Coroner instructed the jury to find that Thomas died from natural causes.

A Prevention of Future Deaths report was issued to Yorkshire Ambulance Service and NHS England/Improvement.

Thomas was a beautiful, loving, compassionate and most of all mischievous little boy. He enjoyed spending time with his family and was loved like only a youngest brother to three big sisters can be. Thomas was a very much loved son, brother and uncle.

Thomas had Down Syndrome and by the time he was a teenager he was known to also be autistic. Thomas used Makaton to communicate and was able to make his needs understood when people got to know him.

As a teenager Thomas became more anxious and we asked for support to keep him at home. This support resulted in Thomas being taken away by the Police and getting sectioned under the Mental Health Act. He was taken into care where he was abused by a care worker, who received a suspended jail sentence. Thomas was traumatised by the abuse, his behaviour was increasingly unsettled and distressed. He received no specialist trauma support and instead was sectioned again under the Mental Health Act and moved to an Assessment and Treatment Unit in Bradford.

We were concerned about the care he received, how over medicated he was, and that he had a number of unexplained injuries as a result of physical restraint. We tried to raise our concerns with the council and carers again and again, but they would not listen. In fact it seemed that we were treated with contempt for daring to complain.

Bradford said that they could not provide support for Thomas in our community, so he was moved to Sheffield to a ‘specialist service’ run by Lifeways. This move was against his, and our, wishes and further allegations of abuse were dismissed.

Thomas’s physical and mental health declined rapidly and we were screaming out for help. Six months later he was dead.

It is coming up to 6 years since Thomas died. We trusted in the coronial process but as time has passed the scope of Thomas’s inquest has been narrowed further and further. His inquest didn’t examine any of the wider failings in care, the abuse he suffered, the lack of trauma support or why Thomas couldn’t live in his local community. It just looked at the last 5 days of his life. The first coroner promised a thorough Article 2 inquest, this started last year and was put on hold due to Lifeways wanting more expert evidence. The experience of this year’s inquest was very difficult for us, with the focus narrowing even further, and the expert evidence we waited for not even being heard.

The jury were instructed that the only safe finding they could reach was that Thomas died from natural causes. We are left wondering how it can be natural for a fit and healthy 20 year old to die from a chest infection.

We feel Thomas’s voice has been dismissed in death, as it was in life.

We would like to thank Sebastian Del Monte and Emily Formby for their legal representation, and everyone who has supported us in our campaign for justice for Thomas.