Today it is a year since my #hairhack, that’s one full rotation of the sun and probably my least hirsute one yet. I wanted to write a blog post, partly to share some learning and mark a year on, but mostly to update on the two causes that I shaved my head for in the first place: Rowcroft Hospice and JusticeforLB.

So what learning do I have to offer from the last year and shaving my head?

1) It really doesn’t matter I may be at risk of stating the obvious with these learning points, but it is a revelation and a relief to know so clearly that it doesn’t matte whether you have hair or not! I’m aware that I chose to lose my hair, and many have less choice available to them, and may therefore feel very differently about this, but, for me it is somewhat reassuring to remember that it doesn’t matter what your barnet looks like.

2) It saves more time than you realised I am not someone who could ever claim to be vain but it is amazingly liberating not having to wash and dry and comb your hair! I was somewhat worried that being bald would result in my paying more attention to my appearance overall, but am relieved to say this wasn’t the case (see point 1).

3) Few people care as much as you think they do or perhaps more accurately, wish they do. In some respects that’s a good thing, no-one wants to be judged for having crap hair, but in other situations it’s not so great (see below).

4) Kids are like transparency and honesty litmus paper the only people who came straight out and asked me why I had no hair were kids; I was mistaken for a bloke on three occasions, once in a swimming pool, once in a bar and once in a restaurant. The bar/restaurant situation was slightly more awkward because I just ignored it and tried to make light of it. The swimming pool situation was by far the easiest to laugh off because the guy’s kids (who he’d told to move out of the gentleman’s way) broke into full scale hysterics.

5) Perspective is everything as much as we may imagine we know something, or think we can empathise, there is nothing like real life experience of a situation for hammering it home. Perspective is key, as someone who has spent a lot of their life dealing with evidence-informed practice I do tend to triangulate a lot, looking constantly for additional sources, trying to find rationality even in the deepest dark depths of madness. One thing that I’ve had reinforced time and again over the last year is that perspective is everything, what I find heart-breaking/unacceptable/beyond comprehension is just shit luck/management/system failure to someone else.

So, what of the causes behind my shave? Rowcroft Hospice are going from strength to strength in their profile raising, next month they have a unique opportunity for local people to walk or run the new bypass when it opens. I’m optimistic that raising their profile and getting people talking about their services is as important as any funds that they raise.

The positives of Dad’s death have been driven home yet again over the past couple weeks as I followed Amanda Palmer’s sharing of her friend Anthony’s death, this post the day after the longest day of the year is a great starting point if you’re interested; her tweets and blog posts will hopefully have opened up conversations about death and dying for many who would not normally consider it. It reminded me of what a good experience we as a family had as Dad died. He wanted to die at home and we were so very privileged that we were able to achieve that with Rowcroft’s support.

The depth of our experience has also been brought home in my reflections while reading a book last week, Marion Coutts’ The Iceberg: A memoir. Wow, what a book. Documenting her husband, Tom’s life and death with a brain tumour, I would recommend it to anyone who works in health or social care. A hugely bold claim I know but it is beautifully written and describes the agonising reality of your life changing one day and the marrying of Tom’s decline as their son Ev grows and develops. I could have highlighted half the book there is so much sense in it and there were many times when I nodded along remembering and paralleling Coutts’ experience and offerings and reflections on life. There is much of what Coutts writes that touches on liminality and living in in-between spaces, in her case knowing death is imminent but not knowing when; it got me thinking about the space that JusticeforLB has occupied over the last twelve to eighteen months.

Which brings me onto my second reason for shaving my head, to raise funds and draw attention to #JusticeforLB. It is not my place to speak for Sara and Rich or any of LB’s other friends and family members, neither is it my place to speak for the campaign, this wonderful collective outpouring of love and outrage, but as I sit here in Sara and Rich’s kitchen typing this blog post (and finishing it on a train home from the LB film premiere this evening) I wanted to share how I feel.

If I’m brutally honest this isn’t exactly easy to share; I’m wary of being accused of being too pessimistic or putting a downer on things; I don’t want to be seen as doubting the absolute relentless brilliance of a totally organic, accidental and ever evolving campaign; I also don’t want to give any of the social media surveillants at Sloven any hope that they’re winning (you’re really not and you’ll never meet anyone as stubborn as me when trying to right a wrong); that said if I’m totally honest with you all, I feel deeply sad.

I feel sad that so much energy, time and love has been put into something that so far seems to show no real, tangible, actual difference. I was talking to Bryan, ‘Lord’ Kevin Preen and Michael ‘The Godfather’ of My Life My Choice tonight, one of the eternal springs of hope and optimism comes from the awesome MLMC crew. We reflected on tokenistic, half apologies and attempts to show willing. We discussed that there are good people working at Southern Health and we agreed that while bad things can happen, the way in which those responsible in Southern Health and Oxfordshire County Council, have continued to behave *since* LB’s death is unacceptable. Michael listened for a bit and then pronounced that the problem is ‘they’re scared of the truth’. And ain’t that the truth. The inability of those ultimately responsible to hold their hands up, admit their mistake, meaningfully apologise and make sure the provision provided to learning disabled people, sickens and saddens me.

Just this week Dan and Rebecca reflected on their trip to Glastonbury and how they found hope for the future there; I’ll grab hope wherever it comes from, but for now everything just feels a bit futile, getting justice feels a bit like trying to nail jelly to a tree.

I feel sadness, just deep sadness that it is now almost two years since LB died and we’re still not really any closer to getting Justice. I feel humbled and privileged and grateful that Sara and Rich and Tom and Rosie and Will and Owen have welcomed me into their home and family, but I’m starting to feel like a fraud. Make some noise I said, we’ll work together to get justice I promised. Almost eighteen months on I’m concerned that I’m becoming part of the fabric trapping LB’s family and friends in this awful, in-between, half-grieving, non-justice liminal space.

Coutts talks about how there are no outward signs when someone dies:

Perhaps the one cruelty of this story is that after this, when I look on to the garden, it will look the same. There will be no outward sign. At death the world does not alter: no shift of earth or change of colour, no noise, no shimmer of light, no falling or collapsing of physical objects. The tree standing there will still stand.

A few days after Dad died I wrote Life goes on reflecting on how life continues, as it always has, around and about you, even though yours feels like it will never be the same again. Here’s the thing, we can’t let that happen with LB. His death must be marked, if not in real time, now in a legacy. The effort, energy, love and commitment shown by his family, friends and JusticeforLB supporters can not be in vain.

I must turn this deep sadness into some sort of fuel, I know that, but right now it feels altogether futile.

Almost two years since LB’s life was brought to a sudden, brutal end; a year since my hair was hacked off and it feels like we’re as far away from getting justice as we’ve ever been. Which brings me back to points three and five above, learning from my less hairy rotation around the sun, few people care as much as you think they do and perspective is everything. 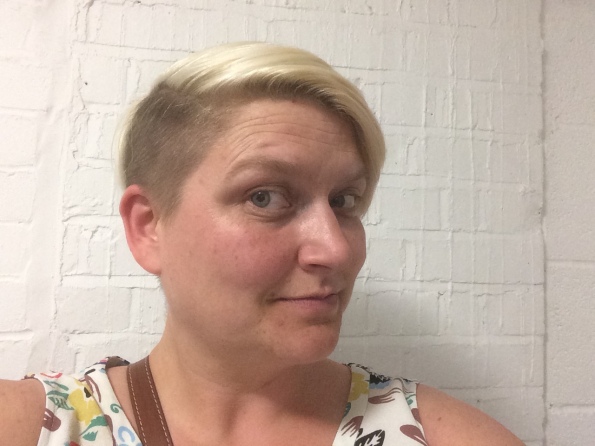 I’ve uploaded one year on pics, taken in the loo at the film premiere tonight, because I know if I post this blog without them it’s the first thing someone will ask!! Reckon it could be waist length before we get any meaningful justice!!

That has provoked lots of different thoughts from admiration to despair. In a year that I too lost my father and one in which I have watched the continuing despair of a great friend whose son died two years ago; it was good to share the mixture of joy particularly the story of the children in the swimming pool and the sense of loss in the quote from Marion Coutts about the world appearing unchanged. This may partly explain by how much it helps to share in the reality of the life that has been lost. They lived and laughed and shared in our lives. They were real and they are real still.