It’s now a few weeks since you turned five and having spent the day together I decided that I’d better revisit the letter on your birthday tradition! So what more can I offer after this from your third birthday and this from your fourth!

The big change in the last year is that you have started school! You love it, love studying, love impressing your teacher, never stop sharing stories about what you’ve learned and who’s in your class. You’ve got a great memory and fantastic verbal skills and an eagerness to learn that I hope you’ll keep for years to come. You’re inquisitive, demanding and relentless, all of which will stand you in good stead as an adult, even if people think they’re somewhat less than ideal in a child of five. 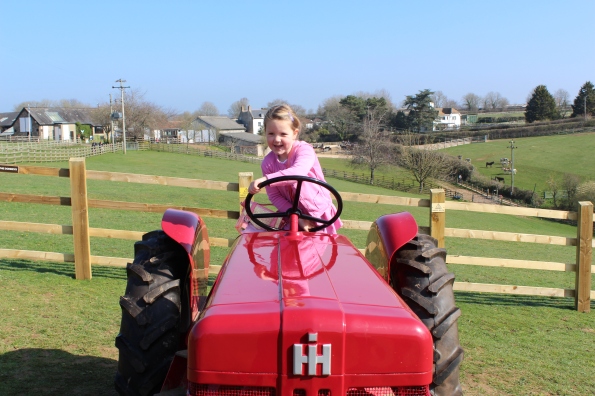 So what can I share this year Libbie? Coming up are ten things, probably not the most important things but they’re want came to mind:

1) Try new things. It’s easy to still be trying new things when you’re only five, there’s still so much you’ve not done before. That said it is also easy to keep doing some things because they are easy, or you are good at them, and if you’re not careful you will end up doing those things instead of new ones. Watch out for that, don’t play it too safe too much of the time. Keep trying new things.

2) Never stop asking questions. This was number two for the previous two years and to be honest it feels that important it’s still worth repeating! As you get older people play this trick on you where they suggest asking questions is dumb because it lets on that you don’t know something. That’s ok, in fact it’s more than ok, it’s essential. People who pretend to have all the answers are just pretending. Even your teachers and your Mum and Dad sometimes.

3) Sit or stand still and stop talking. Just occasionally it’s useful to stop talking and listen, to others, or to silence. Rarely is there silence though, often when you stop talking you hear things you didn’t know were there before, like birds or nature sounds, a bit like the donkeys in the next field today. Sometimes it’s important to stop talking and let Phoebe talk too, I know you want to be helpful and share what she’s trying to say for her, but sometimes you should just stay silent and let her have a go herself. That’s how she’ll learn and get better, much like you did when you were little.

4) Care for yourself. You’re becoming a big girl now, you go to school and get yourself up in the mornings and do lots of things on your own that you couldn’t do before. All of that is great, but the more you do for yourself without mummy or daddy’s help, the more you need to look after yourself. One of the most important things you can do to look after yourself is to get a good night’s sleep; so only get out of bed if you need the toilet, otherwise you don’t play games or read books when you are meant to be sleeping, or you’ll be too tired to learn and have fun the next day.

5) Care for other people. You are a great big sister Libbie, and you care about your mummy and daddy and Molly and grandma and Hugo and Auntie Georgie and Auntie Alex and lots of other people. It is really important that we all look out for each other as we get older. Sometimes people pretend as you get older that it is all about yourself, that you come first and that is all you should worry about. To be honest Libs, this is a lie. We all need each other, it’s called interdependence, no one can survive entirely on their own, so you keep caring for other people.

6) Care for animals. You are a very lucky girl because you’ve grown up with Nuby and Hugo, even though Nuby died. You also love Mogster when you visit Auntie Georgie and you’re very proud that you’ve an adopted Guide Dog and your blind donkey Teddy. Animals rely on us humans to look after them, to care for them, feed them and most importantly be kind to them and love them. You might not always be able to have your own pets at home, but you can always be kind to animals and remember very few animals will hurt children, usually they’re more scared of you than you are of them, so walk don’t run, talk don’t shout and never, ever stroke a doggy unless the owner has told you that it’s okay to do so.

7) Make believe. Today when we were in the park a little boy told you that it was silly that you were pretending to round up the donkeys. That little boy was wrong Libbie! It wasn’t silly, it was make believe and that’s ok. It gets a bit confusing as you get older, people say that you shouldn’t play so much, or make up stories, that you should just tell the truth. When you’re an adult it will be important to always tell the truth, and even as a child it’s important not to tell lies because people won’t trust you if you do. That said, it is okay to play make believe, and to round up the donkeys and drive the tractor, playing is good for the soul and helps you develop ideas that other people won’t have…..which is really important when you get older.

8) Remember that you can be whatever you like when you grow up . When Auntie Georgie was little she wanted to be a skip lorry driver. Uncle Richard used to take her to work with him when she visited, and her cousin Paul would take her out in the cab of his lorry and she’d drop skips off and collect other people’s rubbish with him. I loved it. I thought it was the best job, you were helping people, you got to see lots of things, and occasionally Paul would let me pull the leavers and press the buttons to move the machinery. As I got older I decided to do different work, but a little bit of me would still like to think I’d have been happy as a skip lorry driver. I have lots of happy memories of those trips. Today you were driving the tractor at the Donkey Sanctuary (make believe like a good’un) and you said that you might like to be a tractor driver when you’re older. I think that would be a great job, hard but good honest work. Remember you can do whatever you like when you grow up if you work hard enough at it.

9) Sing and don’t worry too much about the words! When you were preparing for your christmas nativity you had to learn lots of songs off by heart. You were really good at it but you sometimes worried you would get the words the wrong way round. Today you laughed at Auntie Georgie because she sang the wrong words to a song. That’s ok Libs, I don’t mind you laughing, I love making you laugh, but I also don’t mind getting the words wrong because I enjoy singing so much! Auntie Georgie often sings in her car, and I bet most of the time she gets the words the wrong way round, but that’s ok. Sing often Libs, like you and Mummy and Phoebe do together and don’t worry too much about getting it right. Being perfect is over rated.

10) Forgive generously and say sorry. We all make mistakes Libbie, even grown ups, in fact grown ups make lots and lots of mistakes, they just spent lots of time covering them up and wasting energy hiding them so you wouldn’t know. This is so silly Libs, it wastes energy and is confusing for people and upsets people. Don’t worry about occasionally getting things wrong, and don’t worry if people make mistakes to you or are mean or hurtful sometimes, we all have bad days. The important thing is to apologise, say sorry and really mean it, and do everything you can to make it right or not happen again.

11) Eat fruit and vegetables. What you eat now when you are growing up will make a big difference to your health for the rest of your life! That’s a little scary really, but it is important. You said today that you didn’t like fruit! That’s quite a bold statement because there are lots of different types of fruit and I’d be very surprised if you don’t like any of them!! You also drank daddy’s special juice (which is actually fruit squash) so you might like it more than you realise. It is also worth remembering that your taste buds change as you get older, so some things that you might not like today you may like tomorrow or next week, the best way not to miss out is to try them (see rule one).

12) Break (some) rules. This is a tricky one, and you can only break some rules, some rules are definitely not for breaking, like the law and what mummy and daddy say and what your teachers say. Occasionally though it is worth breaking the rules a little bit, like Auntie Georgie intended to write ten things, and has written ten things for the last two years, but this year we have twelve things, and that is okay!

So there you have it, a few thoughts for your year ahead. Not that you need them really because you’re doing just amazing yourself.

Lots and lots of love,