It’s been a while since I’ve blogged, been off grid for most of June. Not before the #hairhack fundraising target was smashed though, thank you all so much. We’re past £5k now, beyond my wildest dreams, and it’s such an amazing feeling to know I can donate a decent pot of cash to Rowcroft Hospice and JusticeforLB. That said some of you missed the original campaign and have been asking about donating, so I’ve set up a GoFundMe page here. Please feel free to donate and share widely.

Anyhow thought I’d better confess that while I’ve raised a shed load of cash, I’ve not managed to achieve the other goals I set myself:

What can I say, going purple was brave and straw is a useful material, I’m too lazy and lacking in discipline to bother with weight loss, and as for the beauty regime it was too mystical and the mosquitos have to feed somewhere!! In all seriousness I think I had a mental image of what I’d look like with no hair that I can categorically tell you I’m never going to meet.

I’m not a very vain person (see points above) and I obviously don’t care enough about what I look like to exercise, eat well or keep my hair. That said, even I am starting to get a few olympic sized butterflies about what it will be like to have no hair. As a very self conscious teenager and young adult I wore all the usual, baggy jeans, rugby shirts, shapeless hoodies, avoided make up with a passion, I didn’t really want to be noticed. Well I was a huge contradiction, I didn’t want to be noticed for my looks, but I craved debate and discussion and nothing pleased me more than my opinions being heard and considered. Through it all I had very long hair, it was like my superpower confidence generator of sorts!

Not for long though. A few people have said I’m brave, more that I’m foolish and when I’ve had the occasional wobble I have wondered what the hell I’m doing.

Then this week I had the absolute pleasure of attending TEDxHoP, an independent TED event organised by the public engagement team from the Houses of Parliament. All of the talks will be available to view on their website in due course (there isn’t a single one I wouldn’t recommend watching, honestly) and you can see Paul Clarke’s awesome photos of the day here. 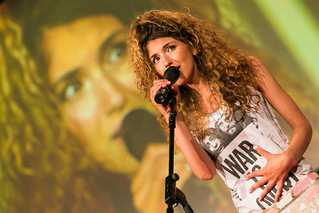 If you look at Paul’s photos (and you really should) you’ll see the number of people, women especially, with awesome hair. I’m not sure if this is above normal, or whether I’m genuinely noticing hair differently as I know #hairhack is imminent. In fact, scrub that, I know I am I’ve started comparing women’s hair to mane’s, there was a woman with a great mane on the tube the night before! Anyhow after being spellbound by Brooke’s voice and hair, it was Francesca’s barnet that caught by eye straight up after lunch. This one is cropped and sleek and chic and way more attainable for me (I hope) in the not too distant future. 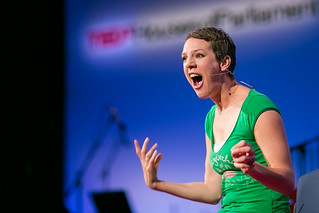 What followed though was a balm to my soul. Any doubts or wavering about #hairhack were neatly packaged as indulgent vanity and brushed aside in one foul swoop by a brilliant talk by Francesca, the wobbly comedian. Francesca’s talk covered her childhood and adolescence and the moment when she first realised that she could choose to accept herself:

I hadn’t realised that I could choose how to view myself. I hadn’t even realised that, somewhere along the way, I had given that vital power away – the only power I possessed, and I had given it away without even knowing it. I never looked back.

You can read more here. Francesca’s appraisal of modern media had the audience in stitches, my favourite one liner ‘no wonder we can’t be worried about changing the world when we’re so worried about cellulite‘. Francesca’s talk culminated in the assertion that accepting yourself as you are is an act of civil disobedience. Just what I needed to hear.

So now, in three days time I’m shaving my head. Like properly all off. I cut my hair short a few years ago and have spent years growing it long again and it currently sits about a third, to half way down my back. Last time I got it cut (about eight weeks ago) I had a fringe cut in and to be honest it’s a small miracle I’ve not cut that off myself, it’s so irritating. So I’m concentrating on looking forward to having no hair, no maintenance, wearing my new sunhat and having the conversations that I hope it will generate, about death, dying, hospice care, my Dad, JusticeforLB, Connor, learning disability and so on.

Whatever the reality of my bald noggin, I am proud of my actions and delighted to be generating discussion and funds, and the next time I have a wobble I’ll refer back to Francesca and her wobbly revolution, because it’s who I am, not what I look like that matters, hair or no hair.