Not a very jazzy blog title but I’m altogether out of inspiration as I sit here incredulous at the report into the death of Connor Sparrowhawk, or as he’s known LB (an abbreviation for Laughing Boy). If you don’t know about LB or the amazing fight by his family, led by @SaraSiobhan, then please take 90 seconds to meet LB on YouTube here.

LB died on July 4 last year (2013). He drowned, in a bath, in an NHS Assessment and Treatment Centre where he’d spent 108 days. Prior to that he lived at home with his family for 6805 days without coming to harm. That’s right his family successfully cared for him for 18 years, 4 months and 2 days, Southern Health managed 15 weeks. I’m not even going to attempt to explain what happened during that time because the report published today does that. You can visit the Southern Health website and download a copy here. If you do so please share your thoughts on social media with the #JusticeforLB hashtag. In a nutshell the conclusion was that LB’s death was preventable. Yep, a complete waste of a young life. 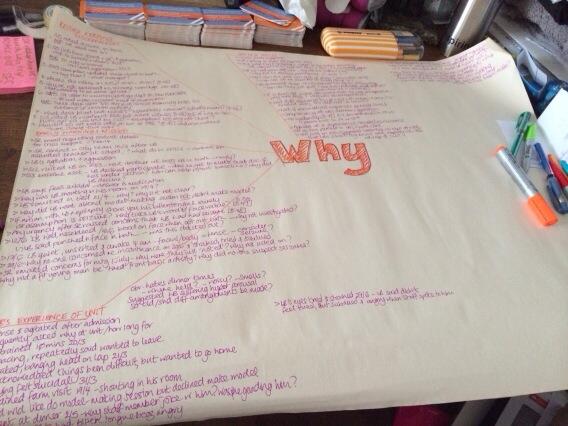 I can not comprehend how ‘care’ within the NHS, for someone with autism and epilepsy, in an assessment and treatment centre could be so dire. This wasn’t a matter of staffing or resources, the unit was fully staffed and only five of the seven beds were in use. The average cost of an assessment and treatment unit is £3.5k per week per person, yes that’s right £182k per person each year. This was not an issue of poor resourcing. So what did go on?

Pouring over the report it became clear that there were a number of discrepancies, obvious blatant missed opportunities, and some whopping great big gaping holes. I’ve listed these below, and will try to come back and add some sort of commentary or thought in due course. Final context is that for some obscure reason, Southern Health insisted on the report being redacted so the unit and all staff names are removed. So the report is full of Ss – you can pick for yourself what S means, my working definition is shoddy, so without further ado some lowlights for you…

[5.28 and 5.29] S5 noted on 21 March (following information from his school and SR) that LB showed increased agitation and was a risk to himself and others but S11 notes on 22 March that risks are minimal and LB is showing low level aggression

[5.32] There is a note to suggest that LB’s care plan was updated on 24 March to include 15min checks when he was in the bath but Why then? What had changed? And why could he need 10min obs on dry land and 15mins when in the bath? Surely that’s the wrong way round?

[5.48] SR told staff she felt that CS had had a seizure. He appeared to have bitten his tongue and lip and was tired. She described these as definite signs related to his seizure activity. S17 wrote in CS’ clinical notes that staff should be extra-vigilant for evidence of seizure but why was SR not believed? Why was the focus on making a note and not doing anything?

[5.59 and 5.60] S9 wrote to neurophysiology department on 31 May to request LB be given a 24-hour EEG. She said: “[LB] has had more seizures recently which is out of character according to his mum and I would be grateful if he was to be considered for an EEG” but three days later on 3 June at a clinical team meeting it was agreed to reduce frequency of observations because ‘there had been no evidence of seizures’. So either staff never believed SR, or they didn’t communicate with each other, or they didn’t have a clue what they were doing (or all of the above)

[5.66] What the hell does blood tests are ‘essentially normal’ actually mean?

[5.68] S13 noted LB had been incontinent on 20 June but she hadn’t witnessed it but at meeting on 24 June it turns out that S13 had been told by S20 and there was no clarity about whether LB had been incontinent (and obvious warning sign of a seizure) or whether he’d spilt a drink. So obviously they decided the latter, in a hospital, treating a guy with epilepsy, whose Mum had already raised concerns about his health repeatedly.

All of what follows are instances within the report that I (as a non-expert in epilepsy or autism) would have been concerned about….

*S12 visited LB on 27 March but decided to come back a week later because he was in the bath!!

*S13 was tasked with conducting a baseline assessment but LB declined to participate – at this point in time a) LB was under a section and b) he had not been assessed – how can an assessment and treatment centre do no assessment or get any baseline if people are given the option to opt out?

*LB said he felt suicidal – the solution was more medication

*LB vomited in his bed on 21 April but again it’s not clear why, and this still didn’t seemingly trigger any concerns for specialist staff in a specialist unit

*If a man with learning difficulties, autism and epilepsy shows you his bitten tongue, would you a) order bonjela and ignore it or b) consider it a warning of a seizure?

*If a man with learning difficulties, autism and epilepsy shows you his bitten tongue AND his mother visits and raises urgent concerns that she thinks he has had a seizure, would you a) order bonjela and ignore it and ignore his mother or b) consider it a warning of a seizure?

*On 12 June LB had a nosebleed. On 16 June he had blood on his face when he got out the bath. When asked LB said he’d been punched in the face in the bath. No-one investigated this, from a safety, safeguarding or epilepsy perspective

*On 17 June LB was quiet, unsettled and awake at 4am. His face and body were described as tense, but still no concerns that he might have had a seizure

*SR emailed concerns for a meeting that took place on 1 July (three days before LB died), these concerns were ‘noted’ but crucially not acted on, it is almost like staff wanted to ignore anything that SR shared. Arrogance or incompetence, who can tell?

There are so many massive gaping holes, all of which sit in context alongside a Care Quality Commission inspection that followed two months after LB died. The biggest and most obvious three for me are:

1. Why was Sara Ryan, as LB’s mother and the person who knew him best, and had managed to keep him safe and well for so long, side lined by staff? Why did they think they knew best? Why did they repeatedly ignore her concerns? What sort of culture allows staff to consider themselves to know more than a patient or their next of kin?

2. How can an assessment and treatment unit not assess or treat someone? There was no assessment of LB’s epilepsy when he entered the unit, this is basic. The unit ran out of the required drugs so LB’s mother brought some in from home – this is an NHS specialist facility, not a third world country. Why was SR having to provide the drugs? An EEG was requested on 20 May but by the time LB died (45 days later) he still had not had one, so no assessment.

3. Where the hell is the leadership in this organisation? Reading the report you see a culture of buck passing again, and again, and again. There is no leadership and no direction. This complete absence of leadership, compassion, honesty or integrity has continued ever since LB’s death, but that is a post for another day.

I offer the above points as a summary for those who can not bare to read the full report. It has consumed me, and enraged me to depths I didn’t know I still had! I can not even begin to imagine the torture that LB’s family must be going through. If you would like to show your solidarity and support you can sign up for email updates here, read the first update here, or join us on twitter @JusticeforLB. We will fight for #JusticeforLB and all young dudes, we must bring an end to death by indifference.

In 18 years of working in social care, l have never left a known epileptic to bathe alone and neither have any of my colleagues. I have no “professional” qualifications eg i’m not a nurse but hey, guess what, I didn’t need to be to think water and epilepsy isn’t a good mix!! Before people scream what about his dignity, he loved to bathe for a long time, how about a shower curtain, how about a screen!! I would’ve identified this during a lengthy assessment process before he stepped foot in the unit as i would’ve got that information from the one person who knew him better than anyone, his mother……

I agree Gemma I have worked with children/adults with LD/Autism/Epilepsy and never have I seen someone left unobserved like this in the bath when they had been warned of possible seizures. You do not need a degree in Nursing to know this – it is basic care!

I am the mother of a 25 year old who has severe LD with rare genetic condition and epilepsy. My daughter went into two treatment and assessment units one of which she lasted five days in. I had to take her meds in as unit could not get some she was on she had no care plan or assessment done in the five days she was there. I raised concerns she looked over sedated I was ignored. On the 10th August 2009 a phone call came in saying my daughters condition had deteriorated and that she needed to go to the hospital. When at the hospital it was discovered by myself that she had been given to much of an anti physicotic drug she then spent the next three months in hospital trying to get her stable she never fully recovered. It then took two and a half years of ours and safeguarding to get the truth of what happened to her whilst in their care . The second time she went in it was away from home we struggled to get her back it took us 5 months to get her home. The reasons for this was because we could not get a care package to meet her needs the health authority and social services did nothing to assist. she was kept on a brain injury unit which was unsuitable for her they used restraint on her and she was bruised badly we reported this to safeguarding but nothing was ever done by them or any other professional we reported our concerns to she was failed yet again by the very system that should have been taking care of her.

I would also like to say LB has one very determind mum and family who got to the truth. You are an insperational family and I am so sorry for your loss.